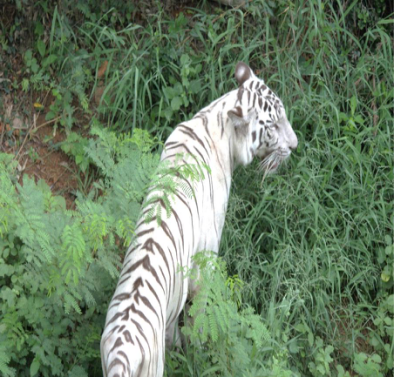 Lion tailed macaque is one of the most critically endangered indigenous species to the tropical rain forests of the Western Ghats in South West India. The maintenance of Viable population of endangered species representing their genetic viability in the wild is a major goal of the Zoological Park. In order to safe guard this species Arignar Anna Zoological Park, submitted a project on conservation breeding programme for LTM in collaboration with SACON, WII and other South Indian zoos Viz., Mysore zoo and Trivandrum zoo to the Central Zoo Authority for funding the project. The proposal envisaged establishment of five social groups in 3 zoos, designing of appropriate enclosure and monitoring social behavioral and reproductive health of the group and training of zoo personal. The project has been approved by the Central Zoo Authority. Two off exhibit water moated enclosures have been built for Lion tailed macaque away from the visitor area to promote natural behavior and fit for reintroduction programme.

This species has also been designated to Arignar Anna Zoological Park as species coordinator. It is the only zoo where regular breeding is ensured.

This species has also been designated to Arignar Anna Zoological Park as species co-ordinator. No animal is available in the Park. Steps have been initiated to procure the animals.

Genetic Upgrading of Tiger at AAZP

Tigers are at the apex of the food pyramids and serve as umbrella species for the entire eco-system. While in-situ conservation of endangered species is in the protocol of the Protected Areas, Zoological Parks are mandated to complement and strengthen the national efforts in conservation of endangered species. Zoological parks provide with facilitates like co-ordinated breeding and raising stocks for rehabilitating them in wild as and when it is appropriate and desirable.

Arignar Anna Zoological Park has a potential male normal coloured tiger. It was decided to out-cross the male with the captive born white tigresses. Out-crossing the normal coloured male tiger with female white tigress results in heterozygous normal coloured F1 offsprings. The first attempt was made in 2012 which resulted in the birth of three heterozygous tiger cubs. First time in the history of Arignar Anna Zoological Park, Vandalur, such a feat was achieved. These cubs were named by the then Hon'ble Chief Minister as a ‘Vidhya’, ‘Arthi’ and ‘Nethra’ on 15.05.2013. Following this out-crossing of tigers the following tiger births were recorded at AAZP,